In 1957, at the age of 37, American Harvey K. Littleton, having studied industrial design, discovered glass-blowing, after meeting the Frenchman Jean Sala during a study trip to Europe; he would indulge this passion until his death. Before giving shape to his designs, he thought a lot about the creativity and the innovation that he could bring to the field of glass art. In 1962, he enrolled in a special glass-blowing programme at Wisconsin University, which was being given for the first time in a University. In the 1960s, Littleton created the "Studio Glass" movement, encouraging glass-makers to work in their own studios; he favoured artistic creation, free from the industrial productivity constraints of glassworks. In 1972, he created several pieces at Val Saint-Lambert, characterised by the naturalistic abstraction of their curved shape. Indeed, the trumpet creeper, more commonly known as the Jericho trumpet, is a climbing plant that can reach eight to ten metres in height. The bright orange flowers bloom between June and October. The name “Jericho trumpets” refers to the capture, in 13 BC, of Jericho in Palestine by the Hebrews, with the sound of their trumpets bring down the city’s walls. In our imagination, we might think that the artist has chosen a way to evoke this legendary historic episode by creating a contemporary piece that borrows from lyrical abstraction. This astonishing clear-crystal sculpture, which rests on a square pedestal, comprises two slightly curved stretched stems at the flared mouth; these are subtly encrusted with a white and green cord. 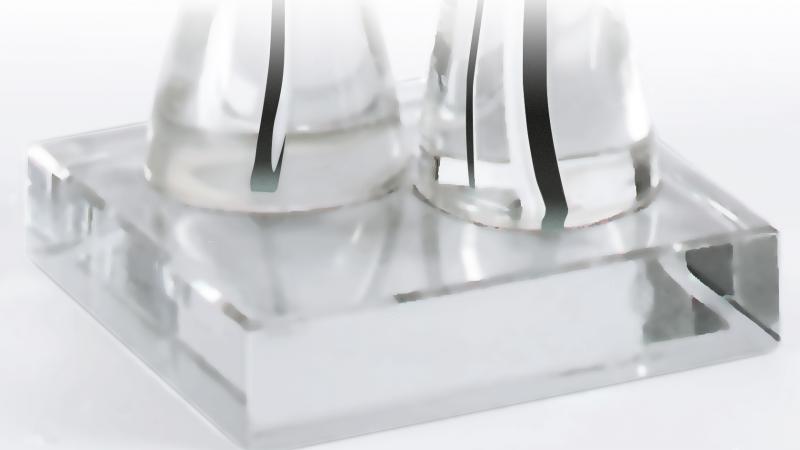