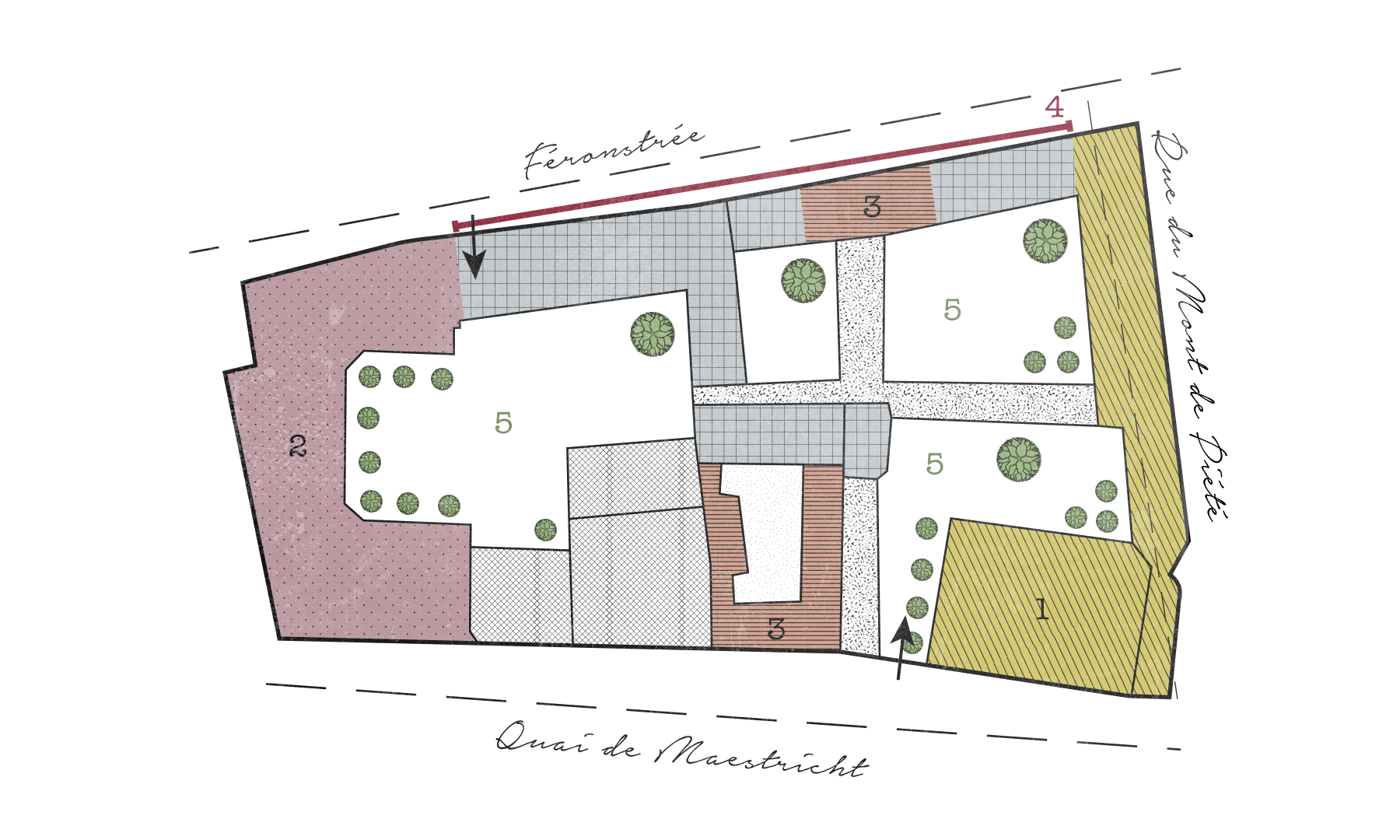 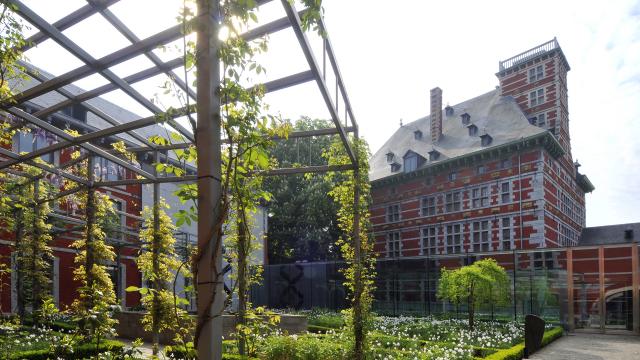 1.The Curtius Palace and Residence

“Although it is a building owned by a private individual, the Curtius house deserves to be counted among the most beautiful in Europe” wrote Philippe de Hurges in 1615. He was coming from Tournai, en route to Cologne.
The Curtius Palace, which gave the museum its name, is the most emblematic building on the site. It owes its name to one of the richest people in the city, Jean de Corte (1551–1628), who Latinised his name to Jean Curtius.
At the time, the building was part of a very important architectural complex that included, besides the "palace", which served as a guest house and store, the family’s residence, located in Féronstrée, as well as numerous common ones where one could find housing for the servants, stables, a gallery and a garden, the splendour and opulence of which were already well-known in the 17th century.
This complex was built on the site of an old canonical house of St. Bartholomew, which Jean Curtius had acquired in 1592. The works, which were started in 1597, were completed around 1603–1604, as attested by the dates inscribed in the interior fireplace decorations on the first floor.
Upon the death of Jean Curtius in 1628, the property was split in two: on the one hand, the “palace”, which was transferred to the Mont de Piété and, on the other hand, the residence, which remained with the family until 1734.
After passing through different hands, the two entities were bought by the city of Liège, the first in 1902 and the second in 1921, so that it could be reconstituted some three hundred years after his death. In the meantime, between 1904 and 1909, the “palace” was restored by the architect Lousberg, who reconstructed the tower in full. This building is characteristic of Mosan architecture from the 17th century, with its casement windows made from calcareous stone and bricks, which are found under a richly decorated and gilded slate roof. The mascarons that adorn the façade add decorative and symbolic elements to the magnificence of the interior decorations. Depicting blazons, fantastic animals and religious or satyric scenes, these mascarons, which were sculpted in Mosan freestone, have recovered their original polychromy during the restoration by the architects Lesage and Satin in 2001.

Jean Curtius: a fortune that was more than smoke and mirrors

Jean de Corte, who was known as Curtius, was a Liège industrialist who, thanks to the sale of arms and saltpetre, managed to accumulate a considerable fortune.
Coming from a family of Brabant origin, Jean de Corte inherited, through his marriage with Pétronille de Braaz, the daughter of a wealthy Liège merchant, various properties, including the chateau in Waleffe, close to Liège. He was also the owner or lord of twelve lands, including those of Tilleur, Hermée, Oupeye and Vivegnis.
It was around the coal mine and the powder factory that he owned at Chaudfontaine that the industrialist built his career. In 1595, he purchased a mill in the same region – the Curtius mill – with the intention of turning it into a large complex for the production of gunpowder. There, he notably constructed a wall and raised a casemate with its staves.
In 1605, he acquired the island of Ster, which was formed by the canal and the Vesdre river. On the banks of the Meuse, he built other mills, forges and rolling mills.
Named "General war commissioner" during the reigns of Philip II and Philip III, Jean Curtius gradually built a fortune thanks to the sale of gunpowder, which he had a monopoly on for the Spanish army. It is this money that allowed him to acquire the Oupeye and Grand Aaz chateaux and his own home, in Liège, which would become the present-day Curtius Museum.
When Spain made peace with her two powerful enemies, France and England, and then with the United Provinces during the "Twelve Years' Truce" (1609), Jean Curtius’ business declined. He then moved to Spain and, in 1617, settled in Cantabria, in Liérganes, where he built a forge and worked in the installations in Liège.
The significant expenses he then incurred, and the reduced return from his Liège companies, forced him to sell his rights to his Lierganes businesses in 1628, a little before his death in an inn in the city. In the years that followed, the Lierganes forge began to flourish and then became one of the most important. 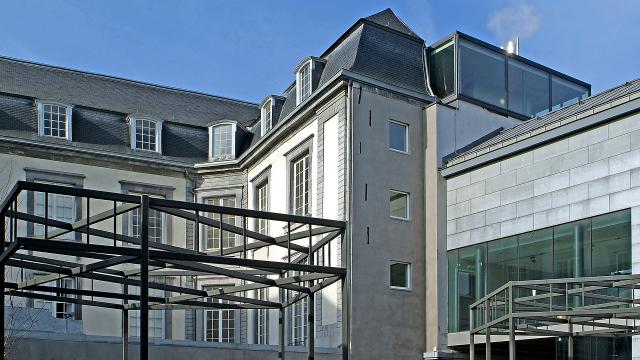 An elegant neo-classical mansion, the Hayme mansion is the perfect example of a French mansion, as part of the great tradition of Parisian mansions from the end of the 18th century. Its typology deviates completely from the mansions of Liège, such as the Ansembourg mansion or the patrician houses of Rue Hors-Château.
Attributed to the architect Barthélemy Digneffe (1724–1784), and built for Jean-Baptiste de Hayme de Bomal, it was passed on to his son, Joseph-Romain d’Ansembourg. Between 1793 and 1815, it was the seat of the prefecture of the department of Ourthe, with various famous figures staying there. These included Napoléon I, who stayed there twice: first with Joséphine de Beauharnais, while he was first consul, and later with Marie-Louise of Austria, after being proclaimed emperor.
After housing been the seat of the Dutch administration between 1815 and 1830, the building became the property of Joseph Lemille, who gave it to the city of Liège in 1884, leading to the creation of the Arms Museum.
The dual access to this mansion is a unique feature. The entrance on rue Féronstrée gave access to a courtyard, around which common areas were developed (kitchens, stables, etc.), which allowed access to the residential areas and the apartments on the first floor via a monumental staircase. The "beautiful" façade overlooked quai de Maastricht, which was then a large garden on the banks of the Meuse.
Through assimilation, this residence is part of the tradition of French mansions that are "between courtyards and gardens". The location of the rooms on the first floor, the "main or noble floor", resembles Italian palaces. Its interior layout and its refined decorations allow similarities to be drawn with some Parisian mansions, such as the Rodelin or Gallifet mansions.
Restored in 2001 by the p.HD Committee, the white and gold decorations have recovered their initial gilding, and the façades once again display the whiteness of the neoclassical monuments, which was very characteristic of the time. This is one of the finest examples of this architecture, which, in this case, borders on perfection. 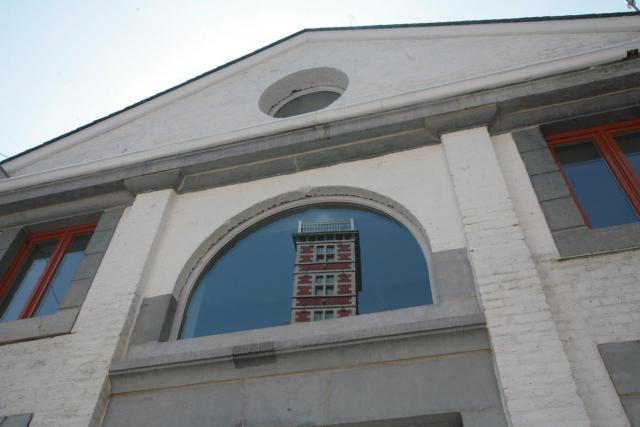 3.The Brahy mansion and the Wilde house

This architectural complex suffered the same fate as the Curtius complex. The “Brahy” and “Wilde” buildings are actually the same mansion, the construction of which, on the site of an old canonical mansion of St. Bartholomew, dates back to the second half of the 17th century.
It was Conrad de Haxhe, who was burgomaster of Liège in 1673, who built, between 1670 and 1685, the first house in brick and limestone under a slate roof. It was composed of the road-facing building and a wing to the west (the Brahy part) and the main building to the south (the Wilde part), the façade of which has a very elegant composition, with two staircase turrets under Mansart roofs.
In 1727, the complex was acquired by the Closset family. It remained with them until the beginning of the 19th century, though not without having undergone many developments, such as being divided into two properties around 1770. The old façade overlooking the main courtyard was walled and the mansion turned towards the quay where its entrance was located. New common areas were added to form the courtyard of the Wilde mansion.
The two mansions had several owners, before being acquired by the city in the 20th century. They were then used for storage until their inclusion in the museum complex.
In the first museum-development plan by the French Repérage group, the buildings were almost entirely demolished to be replaced by a central building. Long legal procedures saved it from destruction. In the current project, it has become the nerve centre of the museum complex, housing the reception, the café and very important exhibition halls dedicated to the Middle Ages.

These historic buildings are connected by modern architectural developments, creating coherent movement and almost imperceptible differences between the diverse constructions from the various periods.
Building G, which serves as the museum’s façade, on Rue Feronstrée, was designed by local architect Daniel Dethier to replace the former Sauvage house, which dates back to the second half of the 18th century (and is included in the Hayme de Bomal mansion), and a former school in a neo-classical building. 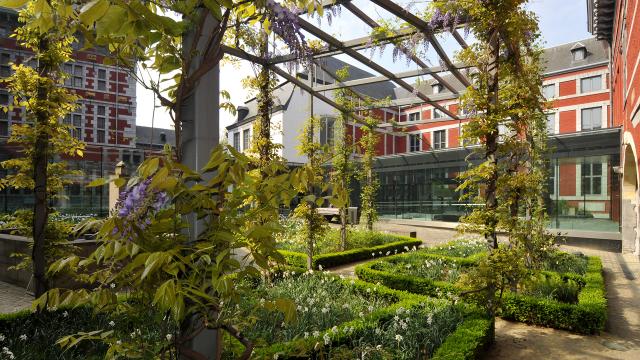 The museum’s exterior courtyards were designed by a landscape architect, Erik Dhont.
In the main courtyard, he created abstract volumes using bricks of different shapes and sizes. Their position in the landscape suggests potential itineraries for visitors. The bricks used for the fountains were recovered from houses that were demolished when constructing the contemporary buildings.