“Source of the Melite fountain”statuette

Aged 65, the famous French glass-blower René Lalique was at the top of his game when he took part in the famous International Exhibition of Decorative and Modern Industrial Arts, which took place in Paris between April and October 1925[1]. A pavilion was devoted to him on the Esplanade des Invalides, in the middle of which “Sources de France fountain” was constructed. This monumental Art Deco fountain resembles an octagonal obelisk with a height of fifteen metres. In the evening, it is illuminated by an interior lighting device and the jets of water look like long spider webs. The cruciform cement base is covered with glass plates, which are decorated with ducks and stylised waves. Topped with a dome, the monument has sixteen levels, which are separated by a trim decorated with plates of glass with stylised floral decorations. On each floor, eight glass bas-reliefs with striated decoration represent the flow of the water. Lalique created 128 female statuettes, each of which is placed between two bas-reliefs. The monument was the subject of much criticism: some compared it to a "bottle holder for pharmacy vials" and others described it as a "Lilliputian caryatid [2], staggered on the slices of a giant banana" [3]! In spite of this, the fountain was the ideal meeting point for visitors who wanted to discover the exhibition site or those who got lost during their visit.

In order to avoid the demolition or dismantling of the fountain at the end of the exhibition, Lalique expressed his desire to donate it to the City of Paris. However, the City Council rejected his offer, believing that his work "cannot remain alone on the esplanade, facing the austere monument of the Invalides hospital" [4]. The artist finally recovered his statuettes, fixed each of them to a wooden base and gave them the name of a muse.

The statuette exhibited is called “Source of the Melite fountain”. This young woman dressed in a beaded drape holds a fish in her hands and bears the name of the muse of meditation (Melete in Greek). This model was created on 29 April 1924 in the Wingen-sur-Moder glassworks, which Lalique constructed in Alsace in 1918. The purchase of high-performance machines allowed him to begin industrially manufacturing hundreds or thousands of copies of his models, all at a low price. Although a production line was used, the artist wanted to focus on the artistic quality of his pieces. The technique used was that of pressed glass, which has been popular in the United States since 1830. The moulds were finely chiselled, in order to reproduce as much detail from the piece as possible. The melted glass, once it reaches a temperature of 1200°, is poured into a steel mould and pressed, with the help of a piston, by a counter-mould. After it has been removed from the mould, the seams[5] are removed using a grinding wheel. Translucent glass with a matte appearance, which was highly prized by Lalique, is obtained by immersing the piece in two successive acid baths. Finally, the piece was polished using a polishing wheel, to give the glass a shiny finish and accentuate certain relief features. The gentleness of the glass and experience found in this feminine figure invite us to meditate.

[1] This exhibition is the point of reference for the assertion of the Art Deco style, a term invented in the 1960s to refer to an artistic movement born at the beginning of the 20th century in reaction to the Art Nouveau decorative style.
[2] Vertical architectural support in the shape of a female statue.
[3] Marcilhac Félix, R. Lalique, Catalogue of glass work, Les éditions de l’amateur, Paris, 1989, p. 92.
[4] Ibidem, p. 94.
[5] Separation mark between the two parts of the mould. 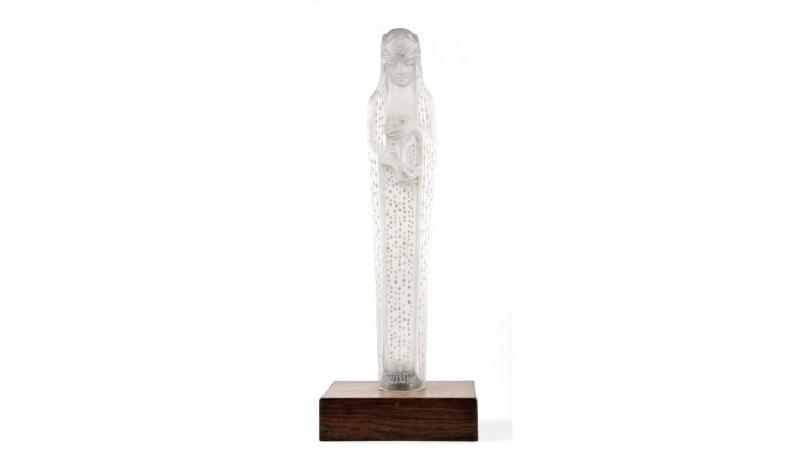