The manuscript contained in this binding was undoubtedly written around 930 AD and may have come from Stavelot or Reims. The upper plate of the binding now appears to be a composite. There are three elements, which date back to three different periods. The centre is occupied by Notger's ivory, which is dated to the end of the 10th century. There are eight enamels around this, which date back to the 1160s. Four gilded and engraved 15th-century lenticular plates are inserted in the interstices. The gospel comes from the collegiate church of Saint John the Evangelist of Liège, of which Bishop Notger (980–1008) was the founder.  The ivory is the most remarkable element of it. We see Christ in majesty during the Apocalypse, giving out blessing with his right hand; these are inscribed in a mandorla that encircles the symbols of the four evangelists. In the lower register, preceded by a cathedral, a figure, presumably the patron, bends his knee and holds a codex in hand; an aedicula stands on the right, sheltering an altar. The peripheral inscription reads: "And I, Notger, overwhelmed by the weight of sin, here I am bending the knee, before You who can move the universe with a gesture". The kneeling figure could, therefore, be the bishop giving his gospel to his congregation. One wonders, however, why, if Notger was indeed the patron of the ivory, he was depicted with a halo. Some, instead, have viewed this character as King David. Like the Oxford ivory to which we can compare it, the style of the symbols seems to refer to the time of Notger and belong to the continuation of earlier Metz ivories. The eight champlevé enamel plaques are typical of the Mosan style. They depict allegorical figures of virtue (Courage, Justice and Temperance) and the four rivers of Paradise (Pishon, Gihon, Tigris, Euphrates). The characters are distinguished by their animation and a strong use of red enamel, which is generally used in a more sparing way. The lenticular plates are chiselled with shredded foliage, in a style that characterises the Gothic goldsmith work of the 1400s. 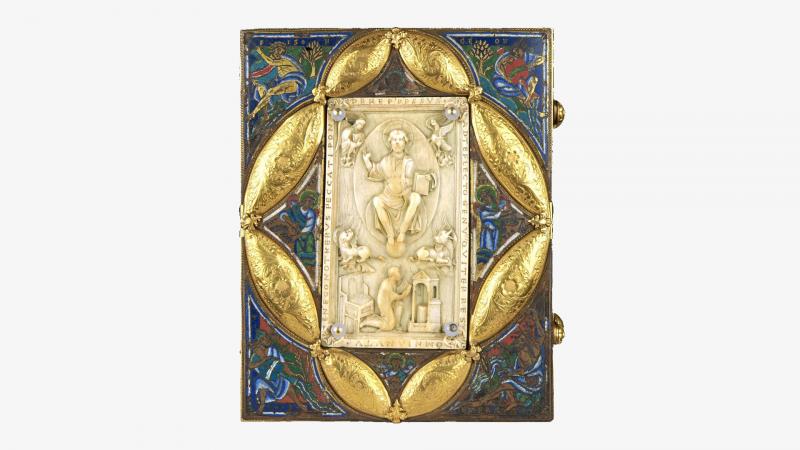