This double panel, which was undoubtedly made in Liège after 1488, was donated to the Saint-Lambert Cathedral by Henri ex Palude – Latinised name of "des Marets". Already part of the canon of the chapter of this insignia church, he became the great precentor in this year and died in 1515. It is accompanied by the insignia of this position – the staff with a bird atop it; he has been represented here with juvenile features, with his coat of arms and surrounded by the scene of the martyrdom of Saint-Lambert. This takes place in an oratory, in accordance with the Medieval iconographic tradition. The holy bishop, depicted in prayer, is mortally wounded by a soldier who strikes him. His two acolytes suffer the same fate, one (on the left) under the blows of a "guisarme", the other (on the right) by a "scimitar". A golden altarpiece is on the altar, with an image of Christ in majesty at the centre. The Nativity is represented on the other shutter: the serenity of this composition contrasts with the dramatic turmoil of the other panel. A ruined building serves as a stable. In a meadow in the background, the shepherds receive the news of the Birth of the Saviour from an angel. The presence of a column among the ruins refers to the "Revelations" of St. Bridget of Sweden: according to them, the Virgin would have given birth with this in the background. As for Saint Joseph, if he can be seen to be protecting the flame of the candle with his hand, this is to symbolically express his role in the Holy Family.

The reverse of these two shutters is painted with scenes in grisaille, a type of smokescreen that imitates the sculpture. One represents the Judgement of Solomon; Christ and the adulteress is depicted on the other.

Although this work may have been executed in Liège, it shows how much its creation leans on the tradition of Flemish painting in the second half of the fifteenth century, and is indebted to models by Gérard David, Petrus Christus or Dirk Bouts. 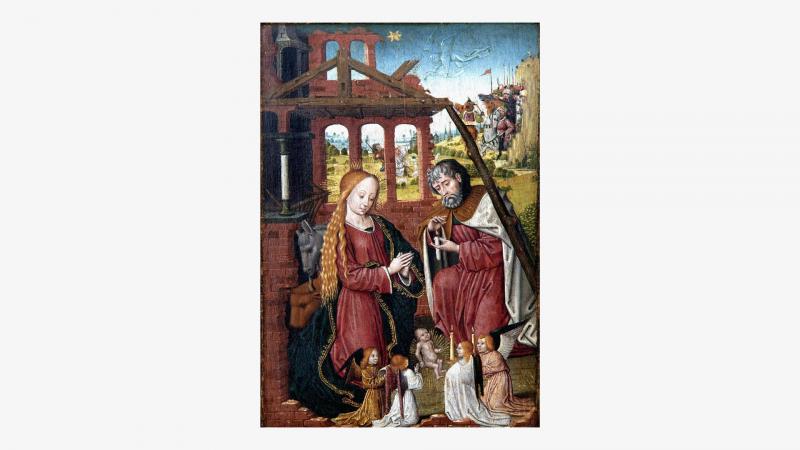