Tympanum said of the Mystery of Apollo

Work classified as a Treasure by the Wallonia-Brussels Federation (September 15, 2011)

This relief, the stylistic elements of which make it possible to date it to the third quarter of the 12th century, is decorated with three moulded medallions with allegorical themes. The one in the centre is occupied by a male character depicted from the front. Bearded and wearing a skullcap, he is designated as representing Honour. He extends his right arm, in a gesture of acquiescence, to a man kneeling in profile, offering him a goblet and occupying the medallion on his right. An inscription identifies this second character as Work, who is offering honey. A third medallion, which is symmetrical with the preceding one, shows a veiled woman, Solicitude; her knee is also bent and she is extending two goblets of absinthe towards the central character. Naturally, Honour turns away from her... The overall piece is known as "Mysticum Apollinis", the "Mystery of Apollo", and it is completed with another inscription, the meaning of which has been interpreted in a variety of ways. The composition would represent, in any case, an allegory of Honour rewarding Work, but this theme remains a unique case in Medieval iconography. Honour here would be assimilated with Apollo, the god of the sun who dispenses wisdom. Iconography of this kind highlights the preoccupation of the Liège clerics with integrating ancient culture into the intellectual philosophies that they taught. The presence of numerous allegories in the Mosan works also testifies to their desire to depict their ideas in images. As such, we can hypothesise that the relief, which was undoubtedly a door tympanum, could have been integrated into the buildings of a school, perhaps even the one that was annexed to the Saint-Lambert  Cathedral, the fame of which went far beyond the boundaries of the diocese. 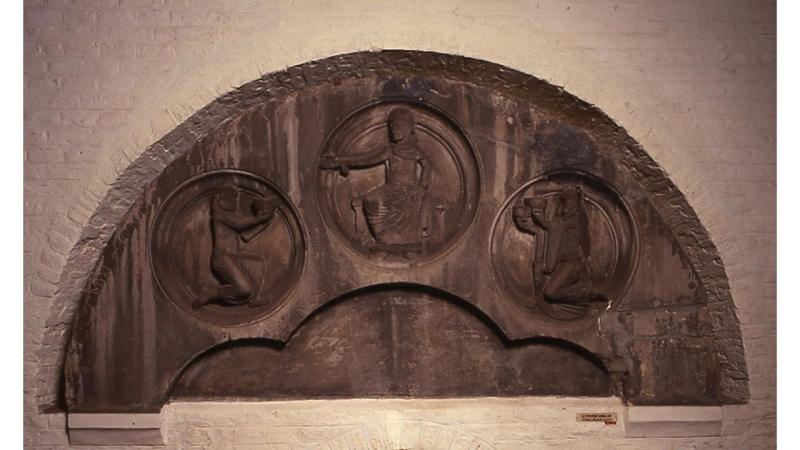 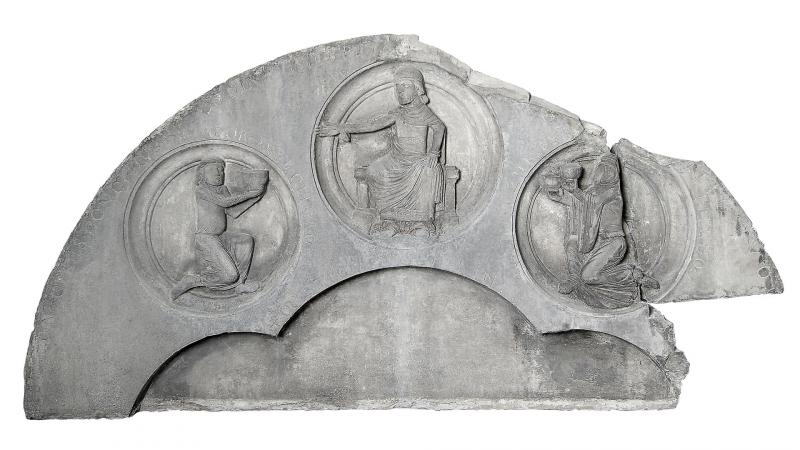