This ceremonial glass owes its name to the extravagant high leg that catches our eye, and the creativity and expertise of the glass artists who created it from their glass gob.

The deep cut rests on a flattened piriform baluster and the foot is surmounted by a slender baluster and a blown button, to which three "handles" in the shape of an "S" are applied, with crenellated decoration formed by the pliers. Apart from the "handles", all these elements are "reticello" glass, that is, decorated with a tight interlocking white filigree which forms a diamond mesh, with each containing a bubble of air. This decorative technique was invented in Murano prior to 1549.

The exuberant and complex decoration, which conceals a white and blue filigree stem, consists of three pairs of dragons with intertwined bodies[1], alternating with three colourless fins and sheets of white and aquamarine opal glass. Four partly broken appendages are found at the top of the pinched end; they are shaped like a rosette and an upright palm leaf. The arrangement of these various elements, which were worked with the pliers and applied while hot, shows the boldness and dexterity of the Venetian glass-makers.

This type of glass was made just before the period in which Venetian glass declined in popularity. These astonishing glasses were produced in Murano, but also in the Bonhomme factories in Liège, because several glass-blowers from Venice or Altare in Lombardy resided in the city. Some employment contracts mention that the workers should produce “extraordinary glasses”.
The dragon motif adorns Baroque-style glass, which were made during the 19th century when Venetian glass was experiencing a revival. It can form the leg of a stemmed glass, the handle of a ewer or hang on the edge of a cup.

[1] One dragon has red eyes and a green body, the second has yellow eyes and a colourless body with white and blue filigree. 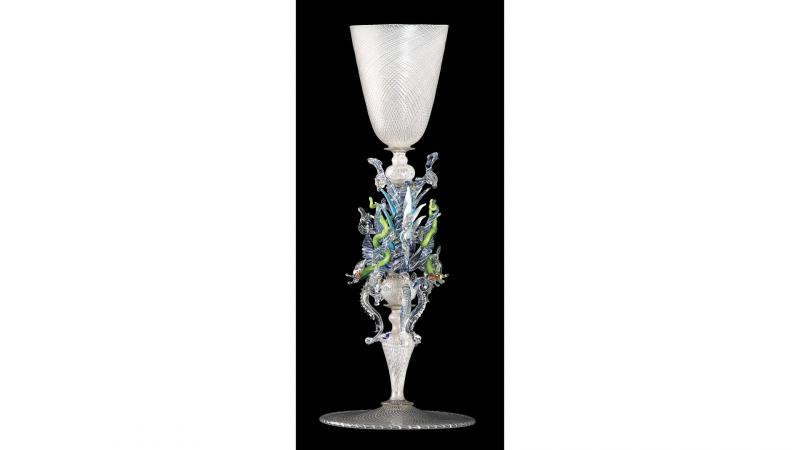 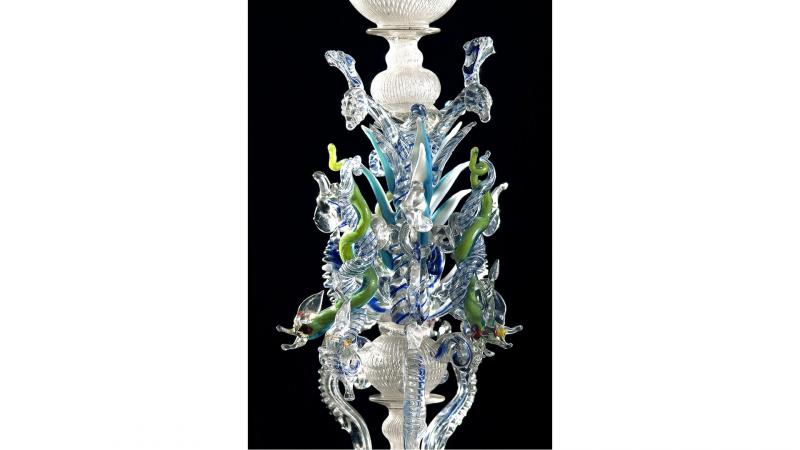